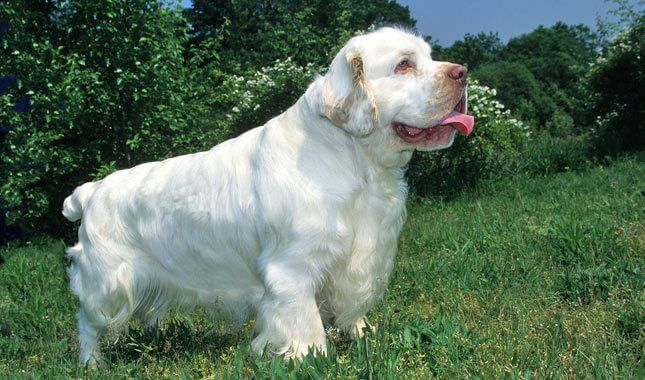 Are you considering getting a canine pet but got your mind set on a white fluffy dog? Well, you’re in luck as there are several dog breeds that perfectly match your criteria. White fluffy dog breeds are definitely among the best dog breeds you can get. They are cuddly, physically attractive and a bright bunch of canines.


Whether you like huge dogs that can stand guard when you’re not at home or little dogs that you can carry about and easily travel with, you will definitely find your ideal dog size among the variety of white fluffy dogs. Every dog that, however, belongs to this category of canines needs to be groomed regularly otherwise its fur will be scanty and rough.

Without wasting more time, here are 18 white fluffy dog breeds you should definitely check out:

This is definitely one of the most popular dog breeds and also an amazing pet to own. It is a good-mannered dog with a happy disposition. Originally bred as a hunting and herding dog, the Samoyed is now renowned for being a normal house pet.


Its white fluffy coat is composed of a double-layer fur and its tail is likewise large and furry. This helps to keep it warm during cold periods.

Due to its furry coat, you’ll have to groom this canine on a regular basis to keep it clean and neat.

This towering canine belongs to a category of big white dog breeds that are excellent pets to keep. It is a brave dog that isn’t afraid to stand toe to toe against other wild animals like foxes, wolves, and even bears.


Despite its fearless trait, it also has a calm temperament and is an awesome dog to own as a pet. Grooming is essential as the dog is a seasonal shedder. Its white fluffy fur is quite thick and this helps keep it warm during winter.

If you want a white fluffy dog breed that is quite exotic, then the Afghan Hound is definitely one of the best exotic pets you can own. It is a tall and slender dog that is quite flashy. It also has a model-like look that is easily recognizable.

Its fur can come in a variety of colors but the white variant is the most commonly acquired Afghan Hound.

This cute canine belongs to a family of fox-like dogs known as the Spitz. The family is composed of a wide range of small-medium size dogs that bear a striking resemblance with the fox and also have thick fluffy fur coats.

A typical American Eskimo is an ideal pet companion to keep. It is friendly and quite loyal; and depending on the size you get, may be suitable for an apartment.

Don’t be fooled by the adorable look of this dog, it is one of the most efficient canines you can own. It is a reliable hunting dog that can be used to sniff out live games and retrieve the ones that have been killed. So if you’re into hunting and are looking for a white fluffy dog, this is one you should consider. 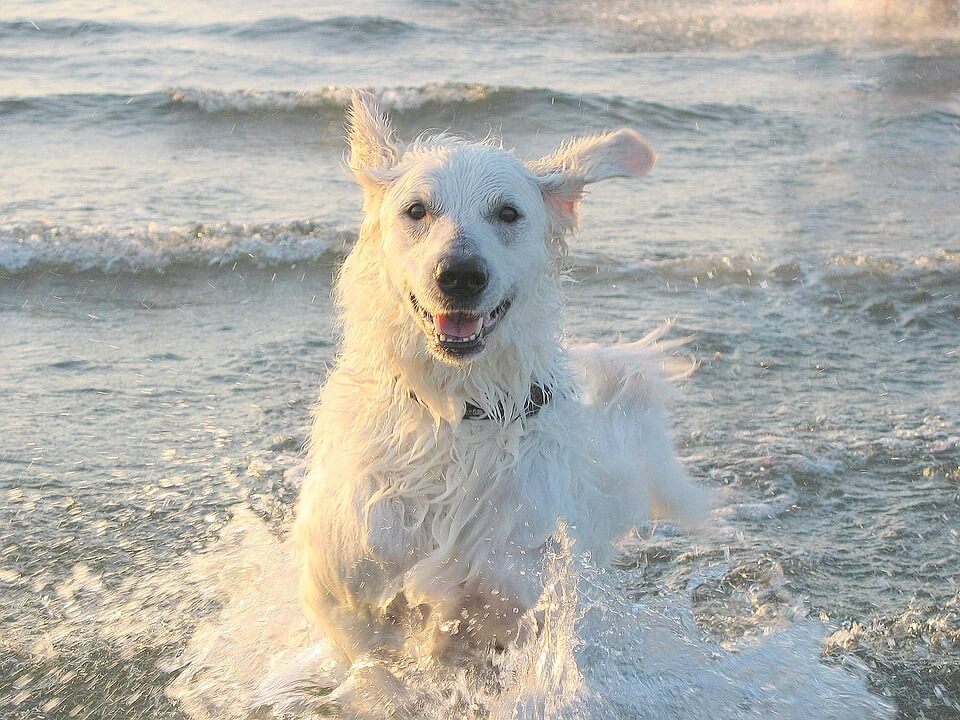 Originally from Hungary, this dog breed is now widely known and is definitely a reliable option if you’re into white fluffy dog breeds.


The Kuvasz is a big white dog that is quite loyal and protective. It is an ideal fit if you’re looking for a family dog that will interact with you, your spouse, and your kids.

It does shed quite a lot even for a fluffy canine, so you’ll have to groom the animal at least 3 times a week.

This dog breed does bear some similarities to the Kuvasz; it is, however, a unique breed with a lot more peculiar traits. It was originally used as a herd dog; though, that has changed now with its role a lot more diversified.

For a dog that can weigh up to 145lbs, the Akbash is quite friendly and interacts easily with people. Despite this non-violent trait, it does get protective of its human family and can be vicious if it needs to be.

While the German Shepherd is a more popular dog breed, the American variant is a valid alternative if you prefer a white fur coat to the original brown-black of the former.

The American White Shepherd is also a very intelligent canine that can be easily trained to carry out a variety of tasks just like its German relative.

This is a Japanese dog breed that is resilient and brave. Its resilience stems from its ability to dwell in the harshest of locations and endure terrible weather conditions.


This trait makes it one incredible pet to own as you won’t have to worry much about its well-being especially if your home is hit with a weather disaster.

The Maremma Sheepdog is a playful animal that is often used as a guard dog for mostly livestock. Its fur coat is quite heavy and thick, making it a stout canine.

It is also a loyal breed that is known to stick to its owner unless instructed to do otherwise. While it is capable of bonding with an individual, it isn’t really social so may not be an ideal family dog.

This is another white fluffy breed that was originally used as a herd dog for both livestock and poultry animals. It is mostly large in size; though, there are variants of the breed that are medium-sized.

It is a protective canine that is quite social, making it an ideal pet for a family. Of course, you’ll still have to engage in regular grooming; but at least, you’ll get a loyal dog in return.

This cute looking canine is probably one of the fluffiest dogs you can get. Its fur coat is dense and thick with the hair evenly spread across the entirety of the dog’s body.

Despite its adorable look, the South Russian Ovcharka is a resolute guard dog that is extremely loyal. It is also an ideal fit for a family, though, you’ll have to groom the sh** out of it on a regular basis.

Known simply as “Tatra”, this dog was originally developed as a herd dog. It has, however, been transformed into an independent dog that is suitable for a family. It is a quite puffy breed that can easily get overweight, making it inactive. So, you must ensure that it gets lots of exercise. 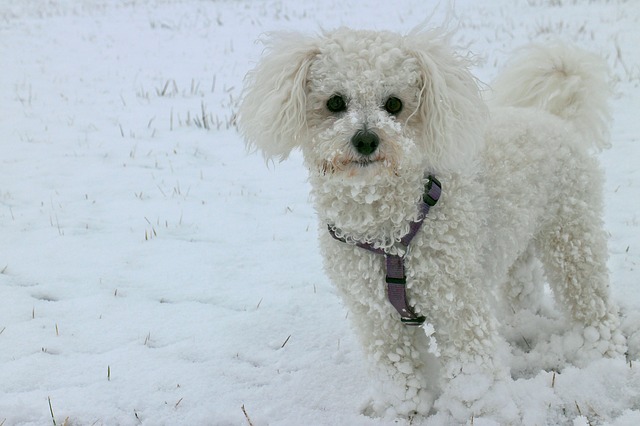 If you prefer smaller cuddly dogs then the Bichon Frise is definitely one of the best small pets for cuddling. It is a gentle dog that is well-mannered and quite cheerful. Weighing under 12 pounds, this cutey can be carried around with ease so you don’t have leave it at home when traveling.

This is another cute small white canine that belongs to the Bichon family. It is a calm breed that loves to remain indoors, making it an ideal pet for an apartment. Its furry hair is quite soft and can easily get frizzy if it isn’t regularly groomed.

If you want a small white fluffy dog that looks exotic and is adorable, this dog should definitely be your first pick. It is a playful breed but also one that easily forms a bond with its owner. One way to easily bond with the dog is to groom it regularly, which is necessary anyway if you don’t want its fur to look untidy. 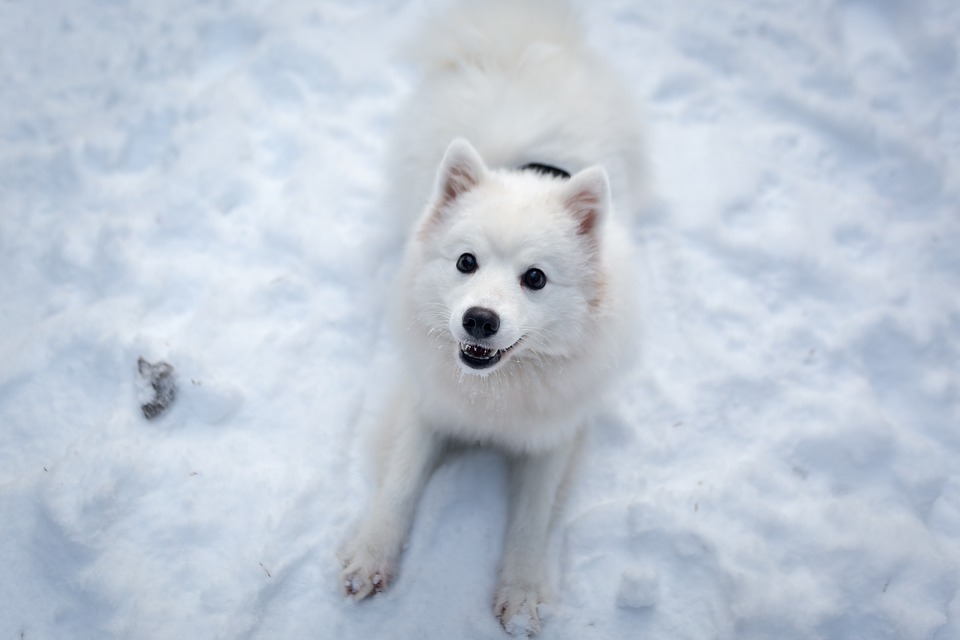 For a small white dog, the Japanese Spitz is a brave canine that can be used as a watch dog. Apart from being high-spirited, this exotic looking animal is also intelligent and charismatic. Of course, grooming is necessary and non-negotiable if you choose to acquire this dog as a pet.

This is a popular dog breed that is available in a variety of colors. It is a cheerful dog that is known to prefer indoor living. This makes it a suitable pet to keep in an apartment. It is also an intelligent dog that can be trained to perform a wide range of simple tasks. So if you want a small fluffy canine that is easy to train, this is the dog for you.